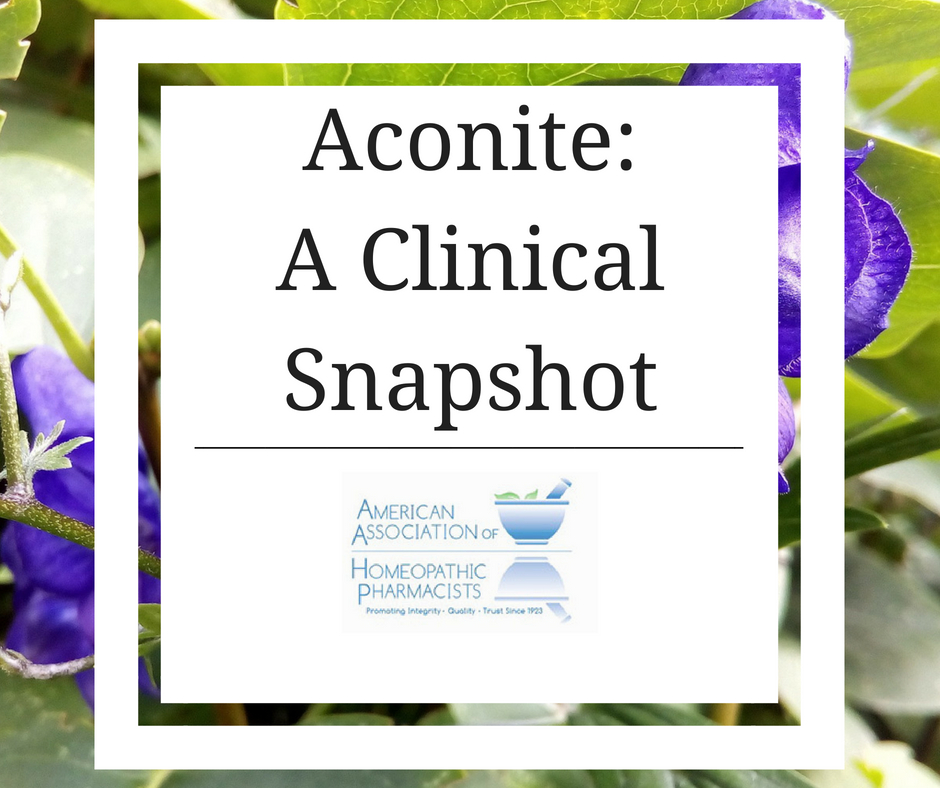 Aconitum napellus or Aconite is a commonly used homeopathic medicine for acute conditions. Also traditionally used as a poison for hunting, this herb is considerably toxic and must be handled with care. Common names include monkshood, wolf’s bane, and leopard’s bane (note that some of the same monikers are used for Arnica montana). The herbaceous plant typically grows in mountain meadows and is recognized by the blue-purple flowers with the characteristic hood.

Aconite species are highly toxic to humans with cardiac arrhythmias, gastrointestinal symptoms, and neuromuscular dysfunction leading to asphyxia as the primary cause of death in cases of ingestion.

This herb has been in use as a homeopathic medicine since the first proving by Dr. Samuel Hahnemann and was noted in his Materia Medica Pura to have been used by a number of experts as a traditional herbal therapeutic. Strong symptoms from the proving of Aconitum napellus include:

This picture developed by Hahnemann is remarkably complete, demonstrating the ability of provings along with toxicology to provide an accurate and reliable picture for the usefulness of a homeopathic medicine.

In practice today, Aconitum napellus is primarily used for acute medical presentations including sudden high fever with chills, fever associated with stitching pains, fever or chill associated with restlessness and anxiety, and particularly with fevers that start around midnight. You can almost imagine an anxious screaming child with a sudden stitching pain in the ear and fever of 103 F in the middle of the night. Such a case is typically of sudden onset and often leads to a frantic call to the doctor in the middle of the night. Many of these cases will respond very rapidly to a dose of Aconitum napellus.

Though used in acute cases more than 90 percent of the time, Aconitum can also be used in chronic cases. One case that comes to mind is that of a 55-year-old man with recurrent panic attacks and anxiety. These panic attacks occurred on a nearly daily basis and were not associated with any particular triggers. The man was consumed by a sudden anxiety, restlessness, and fear that he would die. On further questioning, the problem had been going on for many years without a clear cause. He recalled that when he was younger while pole vaulting, he missed the landing pad and fell onto his back on the ground. He could not breathe from the fall and felt as though he had died. After about a minute, he awoke and went into a panic reaction at that time. He said, “Doc, I really thought I was dead.” On further investigation, he could not recall ever having a panic reaction prior to that event. Aconitum napellus was prescribed in a single dose of 1M. The panic attacks resolved completely within one month of taking the dose.

Whenever Aconite is called for in clinical practice for an acute fever or similar condition, I expect to see a rapid resolution of the symptoms within minutes to one hour. If there is no change within that timeframe, the likelihood diminishes that Aconite is the correct remedy. The primary clinical picture used to prescribe Aconite includes restlessness, fever, chilliness (especially coldness that does not improve), anxiety, stitching pains, vertigo, and sleeplessness. It has been described for conditions that come from exposure to cold wind, though I have not seen that very frequently except with ear infections. Many of these patients are very sensitive to draft, though.

Conditions that might respond to Aconitum napellus if the classic clinical features are present include:

Oftentimes, Aconitum napellus is used acutely with good results, but will have little or no effect on any chronic issues for the patient. The key to remember with this medicine is the suddenness of the onset of disease. Though the disease may come on rapidly, if Aconite is indicated and used, the disorder will likewise abate rapidly. Other medicines which share features with Aconitum napellus include Nux vomica, Belladonna, Chamomilla, Arnica montana, Argentum nitricum, and Arsenicum album.