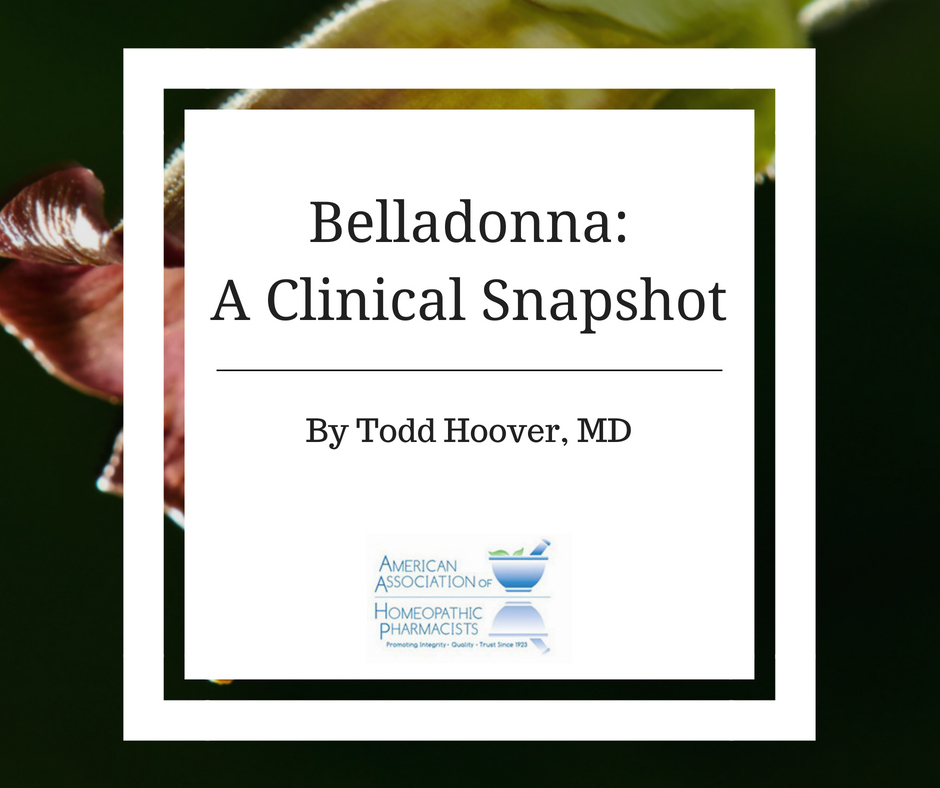 The original proving of belladonna was conducted by Dr. Samuel Hahnemann, who found it to become a commonly used medicine. Dr. Hahnemann described prophylactic effects of the medicine when used in treatment for scarlet fever. Interestingly, he discovered the potential prophylactic effect during an outbreak of scarlet fever, when three children of four in a family under his care became ill. The fourth, who was usually the first to become ill, remained free from disease. Dr. Hahnemann reasoned that since the child had been taking belladonna for an affliction of the finger joints, she was in some way protected from the infection.

Soon afterward, in a family of eight children with three already infected with scarlet fever, Dr. Hahnemann seized the opportunity to test the prophylactic powers of belladonna. As he had hypothesized, all five escaped the disease despite ongoing exposure to their siblings.[i] Dr. Hahnemann continued to make frequent use of belladonna during this epidemic with great success. So great was his success that many conventional physicians adopted his treatment protocol and began singing the praises of homeopathic belladonna. Dudgeon reports on 10 allopathic physicians of this time who used prophylactic belladonna on 1,646 children with only 123 cases developing in the group. These are strong results considering the attack rates of that epidemic ranged as high as 90 percent.[ii]

Hufeland, the great Protomedicus of Prussia at the time, reviewed all the results of the prophylactic use of belladonna for scarlet fever.[iii] His subsequent declaration of its efficacy would be akin to the Surgeon General of the United States recommending the use of homeopathy in the treatment of AIDS today. Hufeland’s support of belladonna as a prophylactic carried so much weight that the Prussian government made its use obligatory during scarlet fever epidemics in 1838.[iv]

Belladonna remains a frequently used homeopathic medicine for both prescription and over-the-counter (OTC) use.

Common clinical indications for belladonna include the following:

A commonly seen clinical scenario where belladonna may be indicated is a patient with rapid onset of high fever, flushing of the face, intense throbbing headache, sensitivity to light, where the patient wants to lie down and rest but cannot find comfort.

Common conventional diagnoses where belladonna should be considered as a potential for treatment (if the typical belladonna indicating signs and symptoms are present) include:

Belladonna would be indicated to treat these diagnostic conditions or others provided the clinical hallmarks of the medicine were present. Influenza, for example, has many features of the belladonna clinical picture such as high fever, with some confusion, coldness of the extremities, abdominal cramping, and sore throat.

Often when belladonna is used in an acute illness, the response will be quite rapid (less than one hour). The medicine may need to be repeated multiple times. Typical dosages used are according to the severity of the symptoms and the clarity of the indication for the medicine. When the clinical picture clearly indicates belladonna, and the symptoms are quite severe and acute, a 200C, 1M, or even 10M might be considered. For most acute conditions where belladonna is indicated, a 30C potency is often the best choice. The medicine may need to be repeated up to three or four times in one day if the patient responds to the treatment, but then symptoms recur. If belladonna is truly indicated for a given patient, the progress toward improvement is typically rapid and easily perceived. Both the symptom picture and the response to treatment tend to be dramatic for this medicine.

[i] Dudgeon, RE. Lectures on the Theory and Practice of Homeopathy,1853. Reprinted South Asia Books, Jun 30, 2002. Republished by Archibel, Encyclopedia Homeopathica July 2000.